On the 28th of January 2022, Cory Wallace, a Professional Canadian Endurance Cyclist set the fastest known time (FKT) riding from the park entrance at Kilema Gate (1980 m) to Kilimanjaro Uhuru Peak (5895 m) and back down to Kilema Gate in a time of 8 hours 55 minutes. 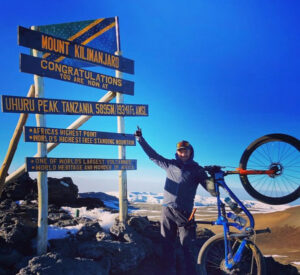 Cory had been in South Africa for a couple of races including the Munga and the Absa Cape Epic and to avoid quaraniting on arrival back in Canada he opted to spend a few weeks in Zanzibar instead as the Covid Gods said this was an option. While he was in Zanzibar doing a training block, the Covid Gods changed their minds and Canada closed its borders. Cory decided to delay his return to Canada and put his training to good use and so he set off bike packing towards the base of Kilimanjaro. After spending some time acclimatising to the altitude with a training block in the foothills of the mountain, he decided to attempt to set the FKT. This took five days in total as you are required to have a guide with you at all times to show you the way, after some negotiation he was allowed to ride/hike up with the guide over three days, spending three nights at altitudes above 3700 m to allow his body to acclimate before summiting on the third day. He then rode down and spent the fourth night at the gate while his guide stayed at the Kibo hut on Kili. On the fifth day he cycled out from the gate at 7 am and reached his guide at Kibo hut (4700 m) at 10:33 am. The next section he had to carry his bike due to the terrain, reaching the summit (5895) at 2:00 pm. The descent was much faster and he rolled back out the gate at 3:55 pm to set the FKT at 8 hours 55 minutes.