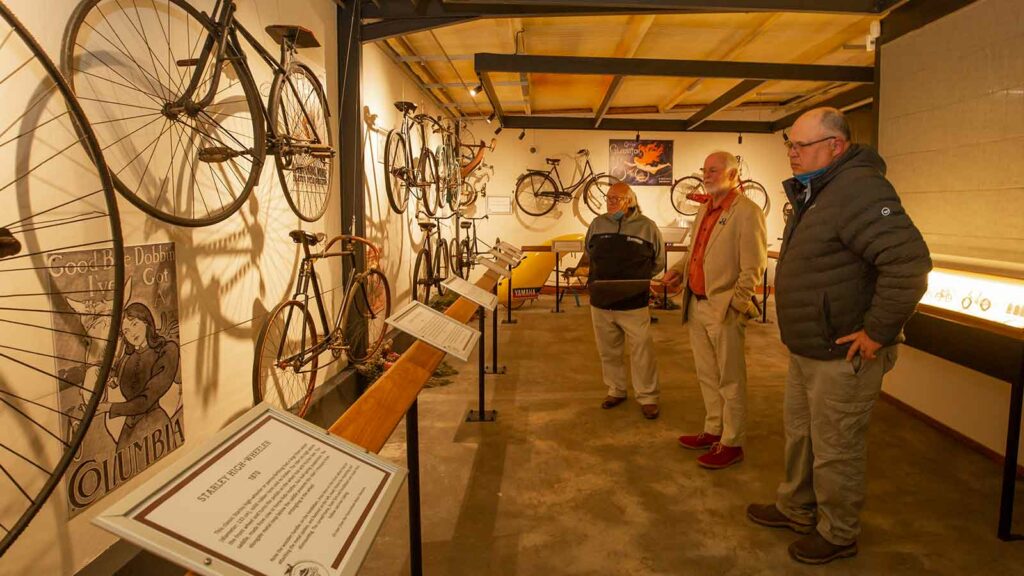 How I helped to start the Bicycle Museum 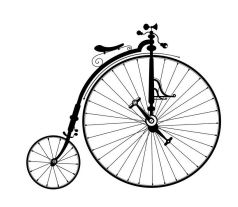 On Saturday, 20th February 2021 I agreed to act as taxi for my son, Craig, and his partner Glynnis Humphrey, both keen trail runners, for a cross-country run that they had planned from Stellenbosch to the Trail’s End Bike Hotel. I dropped them off at Jonkershoek and then drove round to Grabouw. I had not visited the Trail’s End Bike Hotel before but I had heard a lot about it and I was keen to find out more.

My immediate impression was that the whole facility, the buildings, verandah, courtyard, workshop, spinning gym, swimming bath, pump track and flow track, had been very well designed, and I found the cycling decor throughout very tasteful. I was also immediately struck by the friendliness of the staff and their warm hospitality. After a tour of the bedrooms, dining area, conference room and other facilities I was more impressed than ever, and a thought immediately came to mind – a museum on the history of the bicycle would round off this facility brilliantly and turn it into an international attraction. I mentioned this idea to the staff.

I settled down with a book on the comfy couch on the verandah next to the MTB Routes map to wait for Craig and Glynnis to arrive. Suddenly, a tall friendly man with a short beard appeared and introduced himself as Pieter Silberbauer, founder and owner of Trail’s End; shortly afterwards I also met his lovely wife, Brenda. Pieter said that he and his colleague, Shaun Forster, had also considered the option of starting a bicycle museum at Trail’s End but were unsure how to go about it.

I told Pieter that, during my career, I had designed, commissioned and operated several museums and science centres and that I would be happy to help him kickstart this one. My previous experience has included developing the JLB Smith Institute of Ichthyology (now the South African Institute for Aquatic Biodiversity) into a world-class research museum,  launching the Angling Museum in Knysna, the MTN ScienCentre (now the Cape Town Science Centre) in Cape Town, the Sci-Bono Discovery Centre in Newtown, Johannesburg, as well as science centres and science museums in Bahrain and Saudi Arabia. Furthermore, while I was at the Cape Town Science Centre, I developed two exhibitions on the bicycle, ‘Cycology: The Science of the Bicycle’ and ‘Pedal Power for Africa’, which travelled throughout South Africa.

Soon Pieter and I were in regular correspondence, planning and strategizing and creating a network of collaborators. From the outset we also started collecting bikes for display. I arranged for Trail’s End to buy the collection of bikes that I had previously accumulated at the Cape Town Science Centre and Pieter negotiated with Wayne Harley to borrow, on long-term loan, 19 priceless historic bikes from the Franschhoek Motor Museum. As news spread about the new museum bikes and trikes were offered to us from a variety of sources.

After a few months we had a critical mass of display material and Pieter and I spent two enjoyable days deciding on the order in which the bikes should be displayed and suspending them using a very effective wire-and-rack method that he had discovered (and is likely to be the envy of many established museums). This display method had an unexpected benefit – in combination with the spotlights, shadows of the bikes appeared along the back walls, which created a very interesting (and photogenic) effect. In the meantime I had researched and written labels for the displays and Pieter arranged for them to be printed, framed and installed.

We also collected small items of bicycle memorabilia for display in a Victorian-style ‘Curiosity Cabinet’ and printed and displayed copies of spectacular colour posters made during the first bicycle boom in England and France in the late 1800s and early 1900s. With a minimum of bureaucracy and a strong focus on goal orientation, we completed the first phase of the museum in what I believe is a world record time – seven months – in time for the official opening on Friday, 1st October 2021.

The Bicycle Museum has had an immediate positive impact and Pieter has wisely agreed to provide additional accommodation for Phase 2, which will triple its size. It has been a wonderfully enriching experience helping to launch this museum and we have every intention of developing it into a world class facility.